Client: This is Africa 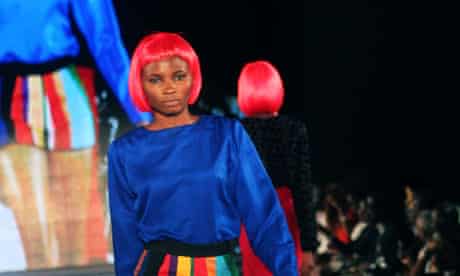 Some significant developments have taken place in African fashion over the last five years. The first of these has to do with perception: African fabrics and fashion are no longer seen by western audiences and buyers solely as “traditional” wear (which was always just another way of saying what Africans made and wore lacked the finesse of western fashion).

Hand in hand with this has been the increasing use of African textiles and other craft and fashion elements by western designers, such as Louis Vuitton’s use of the Kenyan Shuke in its Spring/Summer 2012 collection.

Yet another has been the growing number of African fashion designers who showcase their work on catwalks outside Africa. We’ve written about some of these, brands such as Mina Evans, Uzuri Couture and Wana Sambo, and if you follow African fashion blogs you will discover many more.

Nonetheless, marketing on a global scale remains something of a stumbling block for most African brands. That and international distribution. Western fashion brands do not rely entirely on their local markets, and African designers shouldn’t have to either. This is where international organisation Fashion 4 Development (F4D) thinks it can make a difference: by preparing African designers to work with western retailers, and bringing the two together.

We are usually quite skeptical about Africa-related NGOs, as are most Africans, as so many of them seem to exist more for the benefit of the NGO workers themselves. Some people even believe many NGOs are outright cons, another way for Africa’s wealth to end up in somebody else’s pocket. Fashion 4 Development’s non-profit arm – World Fashion 4 Development (WF4D) – isn’t beyond such skepticism just yet, but so far it appears to be doing more good than harm.

The organisation was founded by Bibi Russel, a former model from Bangladesh who set up a system that helped to build an international reputation for the weavers and craftsmen in that country, and in doing so grew the industry and created jobs. She now “employs” around 150,000 local weavers and craftsmen/women.

That was where the idea was supposed to end, but in January 2011, Evie Evangelou saw the possibility of extending the idea to Africa, and set about doing so via the UN’s media affiliate South South News. It attracted the attention of many fashion insiders and diplomats, the result of which is that F4D is now running similar projects in Ghana, Botswana, South Africa, Kenya, Rwanda and Uganda. The key westerners involved are Evangelou (global chair), UN advocate Ray Chambers, Cesare Ragaglini, Italy’s permanent representative to the UN and F4D’s goodwill ambassador, and Italian Vogue editor-in-chief Franca Sozanni.

Read more on The Guardian >>

This website uses cookies to improve your experience while you navigate through the website. Out of these, the cookies that are categorized as necessary are stored on your browser as they are essential for the working of basic functionalities of the website. We also use third-party cookies that help us analyze and understand how you use this website. These cookies will be stored in your browser only with your consent. You also have the option to opt-out of these cookies. But opting out of some of these cookies may affect your browsing experience.
Necessary Always Enabled
Necessary cookies are absolutely essential for the website to function properly. This category only includes cookies that ensures basic functionalities and security features of the website. These cookies do not store any personal information.
Non-necessary
Any cookies that may not be particularly necessary for the website to function and is used specifically to collect user personal data via analytics, ads, other embedded contents are termed as non-necessary cookies. It is mandatory to procure user consent prior to running these cookies on your website.
SAVE & ACCEPT
Back to top